When you book with an account, you will be able to track your payment status, track the confirmation and you can also rate the tour after you finished the tour.
Sign Up
108

Budongo’s main attraction is tracking a troop of habituated chimpanzees at Kaniyo Pabidi. Your guide will take you along the forest trails to find them. Once found, you can observe them for one hour. They may be feeding in the canopy, or resting and grooming on the ground. If they’re on the move, following them can be quite an adventure.

Many primate species are easily encountered. Aside from chimpanzees, red-tailed monkey blue monkey, black-and-white colobus, and olive baboon can be seen. Nocturnal creatures include potto and several galago species. Also of interest are the high number of birds and butterflies recorded. Herds of buffalo and elephant visit the park from neighboring savannah reserve, Murchison Falls. Although you might see their tracks, they are seldom encountered.

This pristine forest reserve has an amazing number (465 in total) of plant species recorded. Most notable are the impressive giant mahogany trees up to 60m high. Other beautiful trees to look out for are the spiky Fagara trees, parasitic strangler figs, and ironwood trees. The latter is regularly used by chimpanzees for communication by drumming on their trunks.

Aside from chimpanzees, other primates that can be seen along the forest trails include black-and-white colobus, red-tailed monkey, blue monkey, and olive baboon. Nocturnal primates include potto and various forest galago species. The rarely seen tree pangolin is also resident. Keep an eye out for the checkered elephant shrew on the forest floor and the forest giant squirrel up in the trees.

Trekking chimpanzees can be done throughout the year, but the success rate is highest in the drier months (from December to March and June to July). The park stays open throughout the year but, in heavy rain, the trails might be difficult to walk.

Budongo forest is of great interest to birders. It has a checklist of over 360 birds of which 60 are considered west or central African birds. The forest is the second most important in Uganda (after Semuliki National Park) for species of the Guinea-Congo forest region. Two species of birds found in Budongo forest are found nowhere else in East Africa: Yellow-footed Flycatcher and Puvel’s illadopsis. The best location for bird watching is on ‘The Royal Mile’ at Busingiro, but Kaniyo Pabidi also offers excellent forest birding and is easier to explore. Migratory birds are present from November to April.

The birdlife in Budongo Forest is good year-round, but at its best from February to April and in September. June to September is the main fruiting season, so food is abundant, and many birds are in breeding plumage. Migratory birds are in the forest from November to April.

December to February has the least rain while April to May and September to October has the most rain. The heavy rains might result in delays due to impassable roads. Slippery hiking trails can limit your bird-watching time.

Watching wildlife and tracking chimpanzees in Budongo Forest is good all year long. It is best from December to March and also in June and July when rainfall is less.

Budongo Forest has a hot, tropical climate. Temperatures range from 32°C/90°F during the day to a much cooler 17°C/63°F at night. The area experiences a Wet season from April to October. There is little rainfall during the Dry season (December to February). Most often, rain comes as heavy storms during the Wet season.

December, January & February – Skies are clear and full of sunshine, and the highest temperatures (32°C/90°F during the day, cooling down at night to 17°C/63°F) of the year are experienced at this time. It is a ‘dry heat’, making temperatures less overbearing.

March, April & May – Rainfall increases from March onwards, reaching a peak in April. Temperatures range from about 30°C/86°F during the day to 18°C/64°F at night. Forest trails might be slippery and hard to navigate.

June & July – There is a bit of a drier spell in the Wet season, and rains decrease. Daytime temperatures are around 29°C/84°F.

August, September, October & November – The rain returns during this time. It doesn’t rain every day, but when it does, it tends to be torrential storms. Rainfall reaches its peak in October and slows by November. Forest trails might become slippery and difficult to use.

How to get there – Budongo forest

Kaniyo Pabidi, the center for chimp tracking in Budongo Forest, is usually visited en route to or from Murchison Falls National Park.

Budongo is located about 300km/186mi north of Kampala. The drive takes at least four hours. Coming from the southwest, the 280km/170mi drive from Fort Portal takes at least six hours. It is also possible to fly to Pakuba Airfield in Murchison Falls NP by scheduled or chartered aircraft from Entebbe International Airport (EBB) or Kajjansi Airfield near Kampala.

Entebbe International Airport (EBB) will be your entrance into Uganda. Its location is about 46km/29mi from Kampala. It is customary that your local tour operator will pick you up from the airport or hotel.

As with most wildlife reserves and parks in Uganda, in our opinion, Budongo Forest is very safe. Most of the people you’ll come across are fellow tourists or staff working for the park, camps, or tour operators.

Precautions against malaria and certain vaccinations are advised (consult your local travel clinic or doctor). Protection against malaria includes taking antimalarial medication and using mosquito repellent (those containing DEET are most effective). You should also cover up exposed skin in the evening when mosquitoes are most active.

Risks are always present when viewing wildlife, but can easily be avoided by following your guide’s directions and being aware of the ‘Chimp Trekking Safety Precautions‘ below. 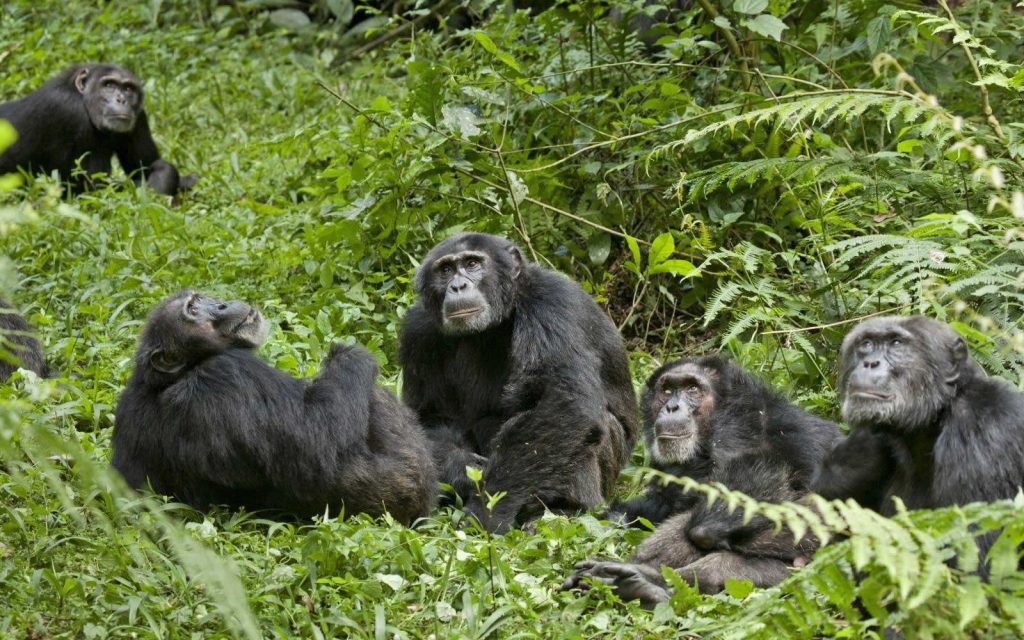