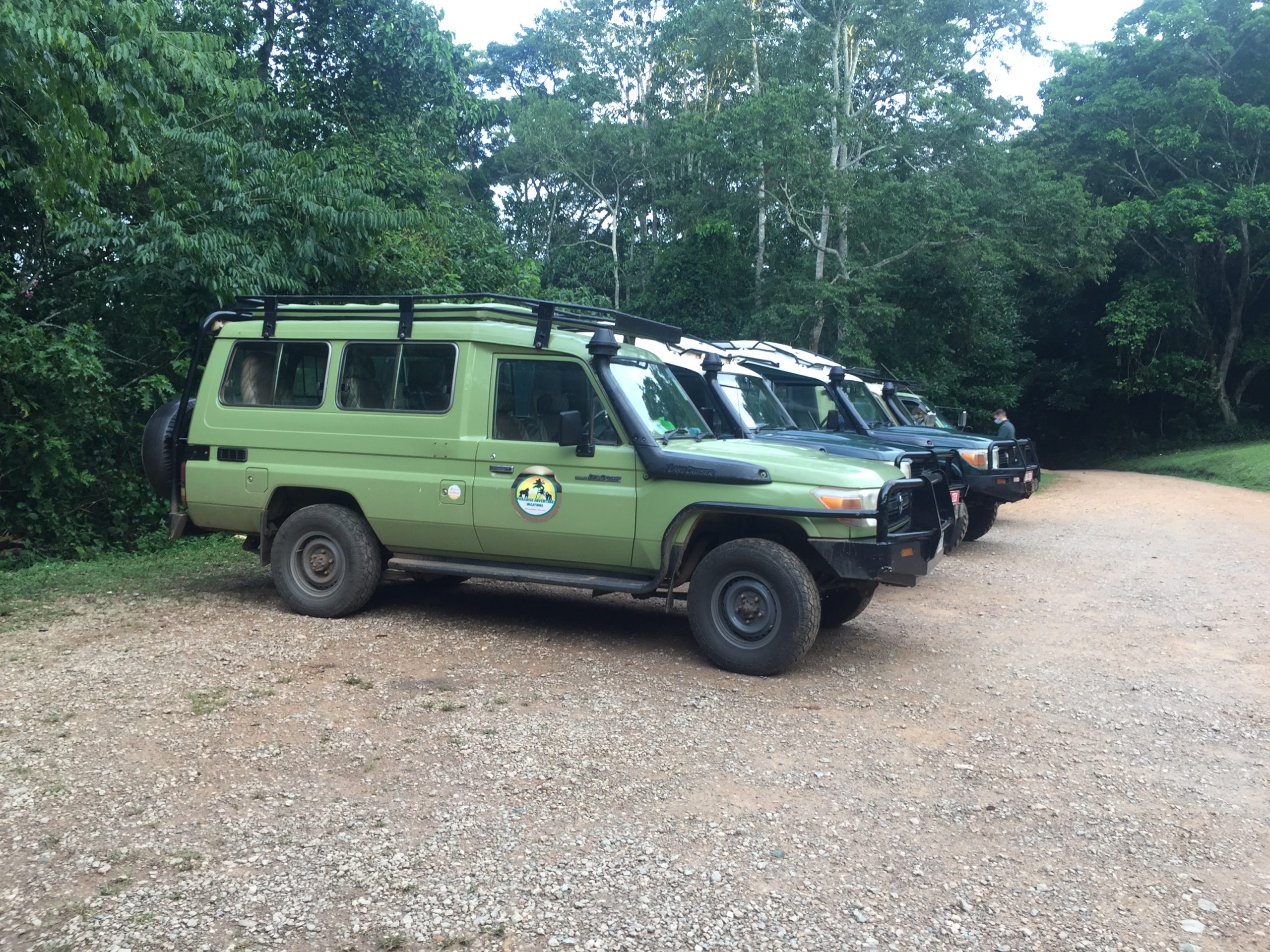 Mountain gorilla trekking always has been topped on the list of Africa’s most thrilling adventures.  A bigger number of tourists have picked the interest to have a chance finding themselves in the middle of the forests living along with the gentle giants. Gorilla trekking has remained possible in the forests of Bwindi Impenetrable National Park and the great Virunga Conservation Areas situated within the African Albertine rift valley. How long can gorilla trekking take? What can it take to trek gorillas? This might be a grim query to riposte. The journey of trekking mountain gorillas is unpredictable which starts right with one’s mind of reaching the giants.

Trekking the mountain gorillas can last from about 30 minutes to 6 hours searching for the giants. The process of trekking the gorillas starts as early as 7:30 am with a briefing on the trekking etiquette done by the chief ranger. After trekkers are joined into groups of 8 people to trek a single trekking gorillas accompanied by an armed park ranger guide to roll into the impenetrable jungle. The search can for the gorillas goes through the hilly, valleys, thick forests, muddy and thorny grasses. The trek continues from seconds to minutes extending to hours according to the movements of the giants, this seems so tiresome, as well worrisome but after finding the giants the hardship went through is all forgotten, and start enjoying the eye glancing.

After finding the mountain gorillas there is an hour for following and watching the apes, looking at their activities you realize that these are really human closest cousins as they can imitate much on human. The gorillas are believed to imitate much of human characters with the human DNA of 98%. Watching the giant silverback eyes you realized its communicating something as the juveniles and infants are seen jumping in tree branches.

What to carry for gorilla trekking

Mainly one must have a permit to trek gorillas, the permit rates vary with the country where to trek from. Trekking the gorillas in Rwanda’s Volcano National Park a permit cost US$1500 the most expensive, Rwanda is known as the deluxe gorilla destination due the hyped permit. Trekking in Uganda is relatively the cheapest no matter the hyped permit costs, considering other factor Uganda’s parks are perfect destinations for budget gorilla trekkers. The permit to trek gorillas in Uganda’s two parks of Bwindi Impenetrable National Park and Mgahinga Gorilla National Park costs US$700. And trekking in Congo’s permit costs US$450 to trek at the Virunga National Park, though this doesn’t guarantee an economy gorilla trek.

If one is opting to trek the mountain gorillas in their natural habitats should consider taking enough preparation before. Besides a permit before setting off your 4×4 safari van, it’s important to note what should consist in your package that while progressing into the thick woods make certain of a full body cover cloth, must have stronger tracking boots, ensure enough drinking water at least 2 liters, packed food for energizing during the during the trek.

When is the best time to trek mountain gorillas?

Gorillas can be trekked throughout the year in all designated mountain gorillas. Not like recent decades the demand for gorilla trekking has puffed up and anytime guest are seen pouring at the gorilla parks. However, according the traveling trail there are two seasons of low experience lower number of guests and high seasons experiencing the hyped influx of guest willing to trek the gorillas.

The low seasons to trekking the mountain gorillas are experienced in the months of March to May and from Mid-September to November, heavy shower dropdowns describes the season and temperatures tend to be as low as at 17OC, forests are misty from evening hours till morning hours. And the peak season branded with relatively dry weather experienced in the month of June to mid-September and December to February. In most cases these month experience severe sunshine. It’s the best and finest season to trek gorilla.

The animals are most loved for their interactionism once encountered in their natural habitats. Are the mountain gorillas aggressive animals? Can gorillas attack people when trekking? If they are how safe are the trekkers of these aggressive and potentially dangerous wild animals? Many travelers/ people are curious about the issue of gorilla aggressiveness before rolling for the adventure. In real sense this helps to understand how one could conduct themselves in case they have encountered the gorillas.

Mountain gorillas are low dwelling primates and the hugest among all the other apes. Only can be located in the mountane forests of Bwindi Impenetrable National Park and Virunga Conservation Aare which is mutually shared among three parks which are the Virunga National Park of DR Congo, Mgahinga Gorilla National Park of Uganda and the famous Volcanoes National Park.

Mountain gorillas are very reserved and shy animals towards people, as well imitates much of human characters among which are communication, laughers, care, emotions, and security as they are believed to share almost 98% of human biological likeness (DNA). The apes live in families which are formed of several members under the leadership of a dominant silverback with other submissive black-backs, adult female and cheerful juveniles. In their family composition the silverbacks always stands to defend the family members from any kind of threat even till death. Mountain gorilla being humble apes but in case of any threat suspicion they turn aggressive and dangerous towards the cause.

How trekker are kept safe amidst the aggressive mountain gorilla?

Well, everyone should know that mountain gorillas are very aggressive animals and can turn dangerous to people when threat is detected. Right from the time of Diana Fossey she discovered that gorillas can hesitate their shy and aggressiveness only when they are trained to be used to human presence. So, the gorilla training process was introduced to combat both their shy and aggressive characters when encountered by people. Gorilla aggressiveness is much displayed whenever one family encounter another gorilla family as the silverback always are motivated at showing their mightier by defending its family members from attacks of other families.

Mountain gorillas can be dangerous but just need special handling which can only display their social lifestyle towards people. The gorilla training process was embraced and done in all gorilla trekking parks, the process is commonly known as the habituation. Gorilla habituation starts as a follow-up of a newly emerged gorilla group from the area where they have been encountered and continues for a period of not less than 2 years until there are assured of being used to human presence. Gorilla habituation is spare headed by a team of experts including primatologist, researchers, rangers, and trackers who hang onto studying a certain gorilla family.

To ensure that trekkers are safe from any threat and attacks from the gentle giants trekking guideline were mad for trekkers. As well also to safeguard the endangered apes in their natural settings during the trekking activities. Though gorillas are fully habituated for trekking they’re wild animals which always react towards any threat. Before trekkers embark into the unpredictable montane tropical rain thick forests, should always adhere to follow ranger’s instructions.

Limit of 8 visitor allowed to trek a single gorilla family daily. Team of mob visitors would disturb the apes and emotionally damage the family and also limits Mountain Gorilla exposure to human illness. In case of any visitor with flu, cold or transferable illness forgo trekking activity to avoid infecting the apes.

A summit with a gorilla family you only have an hour in their presence and watch them at the distance of 7 meters and whenever gorillas tends to move closer slightly step back to ensure the 7 meter.

Visitors with respiratory sicknesses like flue, cold cough or any other contagious infection, forego the exercise to avoid infecting the endangered species.

Silence should be ensured whenever with the gorillas and sudden movements amidst the gorillas to ensure that they remain calm and relaxed.

Never litter in the park as this will lead to environmental pollution, never eat, drink or attempt to smoke while in the presence of the gorillas, don’t use flash photography cameras they can distracts and threatens the gorillas, when encounter the gorillas keep your voices down until you are 200 m away from the gorillas’ location.

In case you want to use a bush toilet, let the rangers know so that he can dig for you a hole that is 30 cm deep and then you close it after use.