A Gorilla Trekking in Uganda & Rwanda with Paradise Adventure Vacations will take you adventuring into the tropical rainforest jungles of Uganda in the famous Bwindi Impenetrable Forest National Park, Mgahinga National Park, and Volcanoes National Park on the Rwanda side to see the elusive mountain giants, the mountain gorilla. Our trips take care of all the hustle and bustle of a Uganda trip including processing the gorilla permit, entry fees & permits, putting together your itinerary, transfers, and making sure you are booked in the best accommodation facilities.

Encounter Africa Safaris specializes in tailor-made gorilla tracking safari tours and holidays in Uganda, Rwanda, and African safaris in selected East African destinations. A Ugandan Local tour operator; Experts in booking escorted tours, city breaks, hiking holidays, mountain gorilla experiences, and more jungle experiences, we can find the perfect holiday experience for you. Wander the mesmerizing East African savanna, hike through the rainforest jungles, or experience the magic of the African culture – we offer the very best that African safaris have to offer. Speak to one of our experienced and dedicated safari advisors; if you need inspiration or friendly advice our team is on hand to provide personalized customer service and expertise.

Gorilla Habituation Experience is a new and unique way of spending a great wildlife holiday in the African jungles that offers a fantastic opportunity to spend up to four hours amongst a family of the remarkable mountain gorilla. Rather than an all-to-brief 60 minutes in their company, observe and photograph them interact, play and groom one another at a gentler pace paying the same price you would pay in Rwanda’s Volcanoes National Park. This is a one time chance to take part in the valuable task of habituating gorillas to the presence of humans.

There are just two gorilla families that are currently being habituated, in the dense foliage of the Bwindi Impenetrable Forest. Trek deep into the trees in search of these sociable creatures, led by highly trained trackers and guides. Pick up the trail of clues that they have left behind as they roam through the forest. After a challenging trek through the green wilderness, eventually reach the family’s location. Approach cautiously, getting close to these powerful yet intelligent creatures.

Uganda has 11 gorilla groups or families habituated for trekking while one is for research. Gorilla families in Uganda include, Rushegura, Habinyanja, Mubare, Nkuringo, Bitukura, Oruzogo, Mishaya, Nshongi, Kahungye, and recently the new groups called Busingye and Bweza. Kyaguriro gorilla group located in Ruhija is for research. Mountain gorilla habituation take about 2-3 years and below are some of the gorilla families in Bwindi Impenetrable Forest. 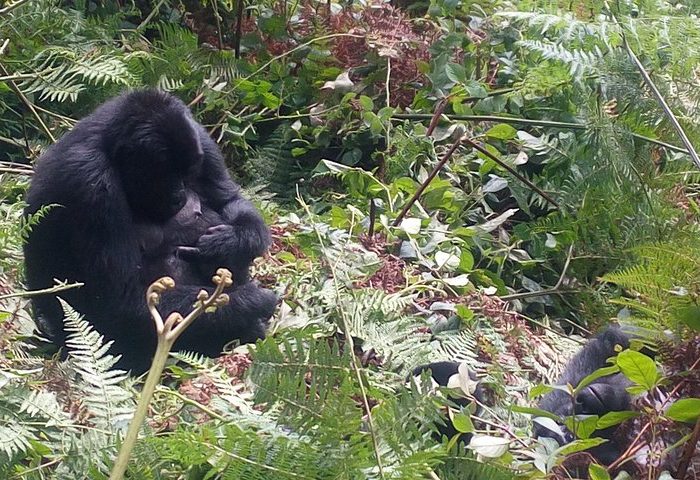 The Habinyanja gorilla family was habituated in 1997 and first visited by tourists in 1999. The name “Habinyanja” comes from the Rukiga word “Nyanja” meaning “a place with water”. The reason for this name is because the group was first seen near a swamp in Bwindi Impenetrable Forest National Park.

At the time of habituation the group was lead by the dominant Silverback Mugurisi, which means “Old man”. After passing away because of old age, the two brothers Rwansigazi and Mwirima shared power but they were so different that it couldn’t continue. Rwansigazi was an adventurous gorilla and liked travelling, while Mwirima preferred to stay at a small range. It was therefore inevitable that in 2002 the two silverbacks decided to separate, without any fights. The group that followed Rwansigazi maintained the name Habinyanja and the members who stayed with Mwirima came to be known as the Rushegura family. Later, Rwansigazi had to give up leadership to Makara who is now the dominant silverback of the Habinyanja family. Sometimes, both groups still come across each other but co-exist rather peacefully.

Sadly, a tragedy happened in June 2011 when the friendly blackback Mizano was found dead with evidence of spear wounds about the shoulders and neck. It is believed that a group of poacher with their dogs ran into the group. Mizano, who naturally defended his family, was speared and died instantly. It was the first poaching incident whereby a gorilla has been killed by poachers since 1995.